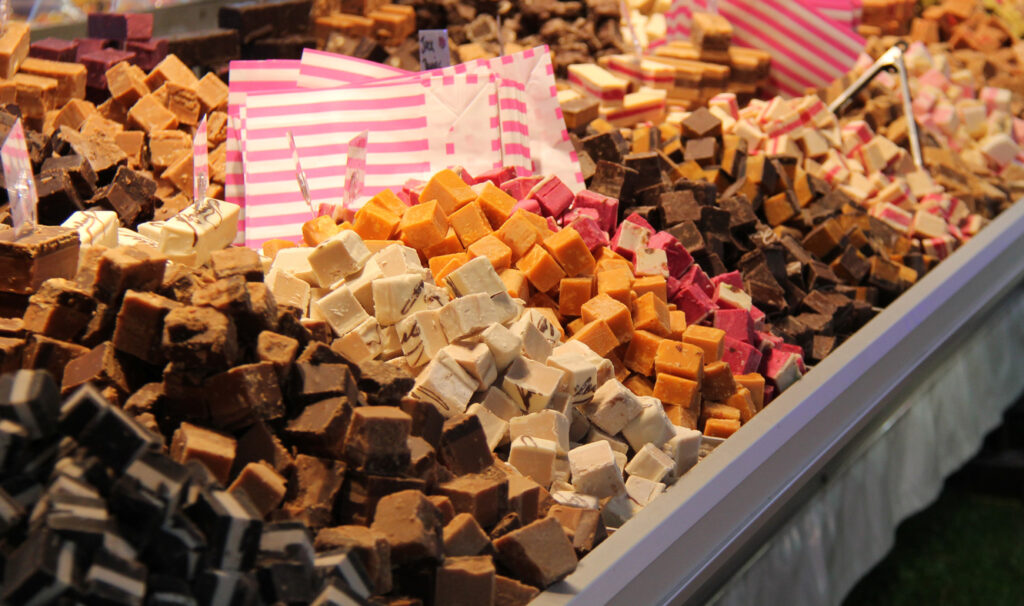 Last year, Stutz celebrated a milestone not every business gets to enjoy: 80 years in business.

It’s a fascinating history. We started off making chocolate in a garage in Jenkintown, and now operate three stores: two in the Philadelphia area and one at the Jersey Shore.

We’re proud to be a part of local food history, and no discussion of that history is complete without mentioning two things: fudge, saltwater taffy, and their connection to the shore.

Fudge: From a college curiosity to a seaside classic

We’ve been making our Long Beach Island fudge for years, but this delicacy was around long before Stutz set up shop. We’ve long thought that the earliest fudge recipe dates back to the late 1800s. That’s what our research suggested when we wrote about the history of fudge a few years back:

“Although fudge-making requires a lot of precision in the kitchen, it may have been invented by accident.

Legend has it that fudge was first created by someone who messed up while trying to make caramel. They had “fudged” the recipe, and this crystalline candy had its name.”

Then we came across an article in the Fort Myers News-Press about a Florida restaurant that claims to have a fudge recipe that dates back to 1837.

However, we do know who helped to popularize fudge. That honor belongs to Emily Battersby Hartrdige, a student at Vassar College, who sold a batch at the school’s senior auction in 1888.

Other Vassar students started making their own fudge, cooking up batches in their dorm rooms. This tradition spread to other colleges, and then to the country at large.

But why do we think of fudge as a boardwalk treat? Why do people search the web for “Long Beach Island fudge?”

Fudge at the beach

Fudge was “an obvious money-maker,” writes Jen Wheeler in Chowhound. It’s delicious, but not always easy to make at home.

But it came along at just the right time, rising in popularity just as the American tourism industry was born. Everywhere vacationers went – and in the early 1900s, this often meant going to the shore – fudge would follow.

“It helped that making large batches of fudge involved an element of spectacle too,” Wheeler writes. “Massive copper kettles were used to boil the sugar and other ingredients, and then the vats of molten chocolate candy were poured out onto broad marble slabs and pushed around the surface with long-handled trowels to hasten the cooling process and shape the fudge before slicing.”

(Wheeler’s piece doesn’t say this, but we’d argue the same thing applies to saltwater taffy, as anyone who’s ever stopped along the boardwalk to see it pulled can attest.)

And if people stopped to watch fudge being made, they’d likely go into the store to buy some too. It probably didn’t hurt that candy stores set up fans to send the enticing smell of sugar, chocolate and butter into the crowd.

The story of saltwater taffy

Long before the first Long Beach Island fudge went on sale, saltwater taffy was the king of the shore treats. And like fudge, its origins are a little bit murky.

For one thing, no one knows how it got its name, but the legends seem to center on a candy store owner named David Bradley whose shop got flooded by a high tide.

One version of the story goes like this: Bradley figured no one would want to buy waterlogged taffy, so he rebranded it as “saltwater taffy,” and a candy legend was born.

“Sorry,” he said. “All we have is saltwater taffy.”

The girl didn’t realize Bradley was being facetious, but his mother liked the name “saltwater taffy.” She thought it was catchy, and other stores soon followed suit.

And like fudge, saltwater taffy benefited from being associated with the beach. By the 1920s, hundreds of companies were in the taffy game, including James, which we’re proud to sell at our Long Beach Island fudge shop.

Are you heading to the Jersey Shore this summer? Be sure to visit our store at Ship Bottom on Long Beach Island, where we sell saltwater taffy and delicious homemade fudge. You’ll see why our treats are part of a decades-long Jersey Shore tradition.