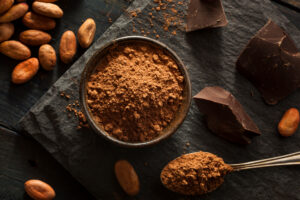 Chocolate is one of the kings of the dessert world, but there’s no reason it only has to be used to make sweet things.

Watch enough cooking shows or read through a few food blogs, and you’ll see that there are elegant, delicious ways to incorporate it into savory sauces, vegetable dishes and entrees.

Here are three recipes that use chocolate as a key ingredient:

This recipe comes from Self.com, and is perfect for fans of steak and dark chocolate:

Here’s a sweet and savory take – from The Daily Meal — on a standard green veggie:

If you want to do more with chocolate beyond adding it to a sauce or a side, try this main course from Epicurious:

After these courses, you might want dessert, but also may not be in the mood for more cooking. Let Stutz satisfy your sweet tooth, whether it’s with our boxed chocolates, fudge, or a box of salt water taffy.