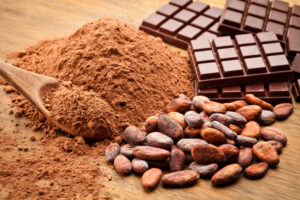 At Stutz, we obviously love chocolate. It’s been our business now for nearly a century, fueling our Bucks County candy shops.

And it’s not just the taste, or the fact that it makes a great gift, or even the health benefits. Chocolate is just genuinely fascinating.

Here are some facts about it that you might not know:

If you’ve ever called chocolate the “food of the gods,” the ancient Aztecs would have agreed with you. They believed that the cacao seeds used to make chocolate were a gift from Quetzalcoatl, their god of wisdom. (In fact, the scientific name for the cacao tree is Theobroma cacao, which means “food of the gods.”)

The Aztecs used cacao as currency, and liquid cacao was the favored drink of Montezuma II, the Aztec emperor, who kept thousands of pitchers on hand for his household and drank 50 cups of it a day. It was this bitter and spicy drink – which the Aztecs called “xocatl” — that gives us the word “chocolate.”

For most of its history, chocolate has been consumed as a liquid rather than a solid. Explorers such as Cortes and Columbus brought cacao beans to Spain, where it became a favorite beverage at the royal court (although the Spanish sweetened their drinks with honey or sugar). By the 1600s, chocolate had made its way to England and France.

During the Revolutionary War, chocolate was still considered a commodity. Soldiers were given it as part of their rations. In some cases, they’d get chocolate in lieu of payment.

Milky Way candy bars don’t get their name from the galaxy where our planet resides. Rather, their name – and their taste – come from a popular 1920s milkshake drink. But that milkshake was named for the galaxy, which gets its name from Greek mythology.

Another candy bar, 3 Musketeers, didn’t always exist in the version you’ll find on stores today. The   original 3 Musketeers was three pieces of candy in one package: one chocolate, one vanilla, one strawberry. It became the single bar we know today in 1945.

One more candy fact: Hershey’s Kisses get their name from the kissing sound made by the machine that puts chocolate on the conveyor belts.

Toll House cookies get their name from the Toll House Inn in Whitman, Mass. Owner Ruth Wakefield created the first chocolate chip cookie in 1938. As the cookies became more popular, Wakefield made a deal with Nestle: they would print the Toll House Cookie recipe on packages of their semi-sweet chocolate bars, and she would get a lifetime supply of chocolate.

Chocolate is a multi-billion-dollar industry with a storied history, and Stutz is proud to be a part of it. For more than 80 years, we’ve been making quality chocolates and other candies using Joe and Mary Stutz’s original recipes.

Visit our website to sample what’s kept us going at our Bucks County candy shops since the 1930s. We guarantee you’ll taste our love for wonderful, wonderful chocolate.

One thought on “8 Things You May Not Know About Chocolate”