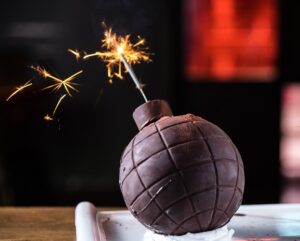 As we’ve written before, we find chocolate fascinating.

That’s probably good, given what we do for a living. But it’s true. Our favorite food has a long history and a remarkable story. Here are some interesting facts about chocolate that you might not know.

Three Musketeers is kind of an unusual name for a candy bar when you think about it. After all, what does Alexandre Dumas’ adventure novel have to do with chocolate and nougat?

Well, there was a time when the name of the candy bar was a little more literal. The original Three Musketeers bar was introduced by Mars in 1932 at a time when the Dumas book was popular with kids.

And it was sold in three pieces with three flavors: vanilla, chocolate and strawberry. We noted this in our original list of interesting facts about chocolate, but never gave the reason why: World War II came along, strawberries became scarce and more expensive, and Mars dropped them as an ingredient.

According to historical documents unearthed in 2012, the plan was to put the deadly candy bar in the War Cabinet dining room where Churchill often spent time. When unwrapped, the chocolate bomb would explode and kill anyone within several meters of impact.

But British spies got word of the plot and managed to tip of the UK intelligence services before Churchill could be targeted.

3. How did German chocolate cake get its name?

From Germany, right? After all, Germany is a major chocolate producer – second only to the U.S. But German chocolate cake actually takes its name from Sam German, who invented a new style for baking sweet chocolate for the Baker’s chocolate company in 1852.

According to NPR, the company named the cake after German, but it would take more than a century for the dessert to become famous. In 1957, a woman in Texas sent her recipe to a newspaper in Dallas, and sales of German’s Chocolate shot up 73 percent in one year.

“But somewhere along the way,” NPR notes “German’s Chocolate Cake lost its apostrophe-s, leaving Germany holding the credit for a classic American dessert.”

4. What do we want? Chocolate!

You say you love chocolate, but would you go on strike for it? That’s what happened in Canada in 1947, when a group of kids in British Columbia learned the cost of candy was going up.

World War II had forced a nation-wide price freeze, and companies in post-war Canada began boosting the cost of goods to recoup their profits.

That meant consumers were paying more for everything, including candy bars. In the space of a single day, the price of a chocolate bar jumped from five cents to eight cents.

This didn’t sit well with children in the town of Ladysmith, who began to protest the Wigwam Café, their local candy shop. They fashioned signs and sang a protest anthem:

The protest made the news, and pretty soon kids all over Canada were protesting the price increase at their local stores. Two hundred children marched on British Columbia’s capital, shutting down business. In a few days, sales of chocolate bars in Canada had plummeted by 80 percent.

The chocolate strike was on the verge of its biggest protest yet, a march on Toronto, when a newspaper story accused the children’s movement of being a communist front. Parents forbade their kids from taking part in the march, the strike lost steam, and the price of candy bars remained the same.

According to Mental Floss, a documentary on the strike, called The Five Cent War, interviewed some of the original protesters:

“Everyone agreed that communism was the furthest thing from their young minds. All they wanted was for their voices to be heard, and to keep a little more allowance in their pockets.”

Last on our list of interesting facts about chocolate: We’ve written before about how chocolate makes you smarter. But Nobel Prize-level smarter?

That could be the case, according to a study published in the New England Journal of Medicine in 2012. It found a correlation between the amount of chocolate consumed by individual countries and the number of Nobel laureates those countries produce.

Author Franz H. Messerli MD writes that “since chocolate consumption has been documented to improve cognitive function, it seems most likely that in a dose-dependent way, chocolate intake provides the abundant fertile ground needed for the sprouting of Nobel laureates.”

Stutz can’t promise you’ll win a Nobel Prize for eating our chocolates. All we want is for you to enjoy what we have. Browse our online store – or come visit us at one of our three shops – to find the candy that’s right for you.