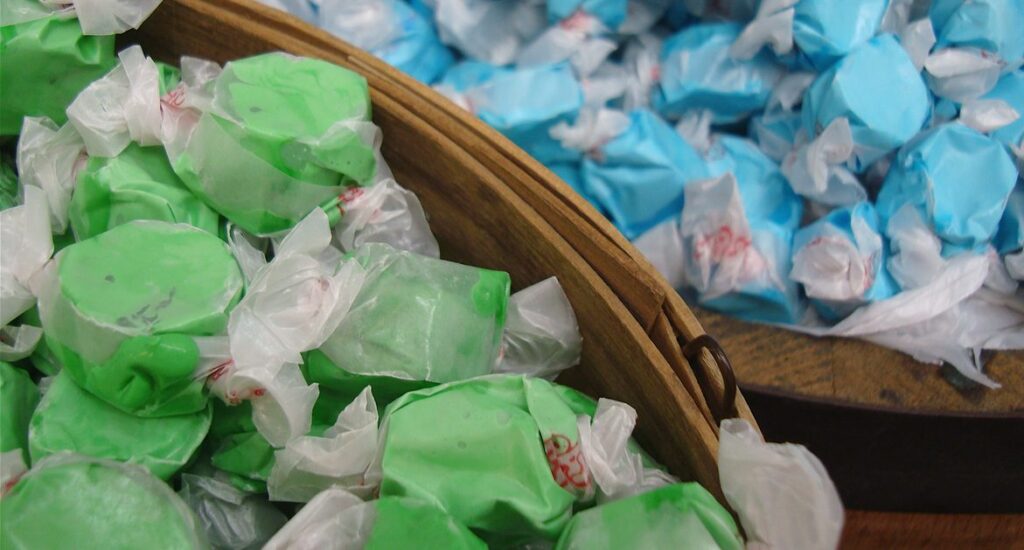 Summer is in full swing, and countless people are heading to the Jersey shore, where they’ll seek out the best salt water taffy the boardwalks have to offer.

It got us thinking again about the history of this classic seaside treat, and its unique history. Read on to find out how salt water taffy got its name.

The history of Salt Water Taffy

If we wanted to trace the entire history of taffy, we’d have to go all the way back 1000-plus years to the Middle East, says Slate’s Lisa Wong Macabasco in her exploration of the candy’s origins.

Taffy arrived in America in the 1840s and became particularly popular in Atlantic City in the years after the Civil War. By the end of the 19th century, Americans knew the best salt water taffy was being sold by the Jersey shore.

But how did it get that name?

To begin with, salt water taffy isn’t made with salt water, just some salt. And the origins of its name have never actually been nailed down.

According to one story, a candy store owner – called “David Bradley” in some versions of the tale– came into work one day to find that his store had been flooded by a high tide, leaving his supply of taffy soaked in sea foam.

Bradley thought the taffy tasted fine but was worried that people wouldn’t want to buy it after the flood. So he rebranded it, and “salt water taffy” was born.

The girl didn’t get his meaning, but Bradley’s mother liked the name “salt water taffy.” She thought it was catchy, and other stores soon followed suit.

“Legends aside, the ploy of directly associating taffy with the sea (and by extension, vacations), as a number of vendors did, worked brilliantly,” writes Macabasco. “Tourists treated themselves to taffy while at the beach and took boxes of it home with them as souvenirs.”

Fast forward to the 1920s, and close to 500 companies were all trying to perfect the best salt water taffy, including Joseph Fralinger, who popularized the candy by selling it in souvenir packages, and Enoch James, who innovated the practice of cutting taffy into bite-sized bits.

Salt water taffy gets its day in court

The first time we discussed the history of salt water taffy, we mentioned the story of John R. Edmiston who trademarked the term salt water taffy in the 1920s and demanded royalties for the nation’s bigger taffy companies.

Those candy makers took Edminston to court, and the resulting legal battle made it all the way to the U.S. Supreme Court, which in 1923 ruled that salt water taffy had been around too long and used too widely for Edminston to claim any profit off the name.

But that’s only one of two Supreme Court cases that involve salt water taffy. In 1921, the court heard the case of Hildreth vs. Matsoras, which was a patent case involving taffy pulling machines.

Heading to the shore? Head to Stutz

If you’re planning a trip to the Jersey Shore this summer, stop by Stutz’s shop on Long Beach Island, where we sell salt water taffy and homemade fudge. Stop and see us at our Ship Bottom store. It’s not summer in New Jersey without salt water taffy.