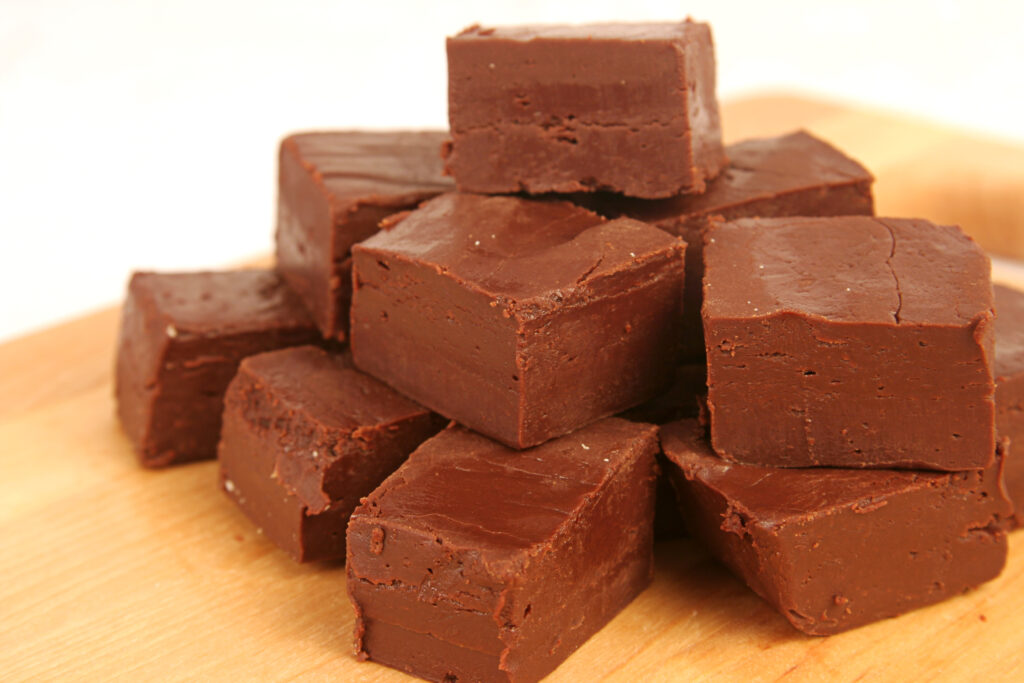 Fudge is one of the most popular candies throughout the world. You’ll also find fudge along with the typical glut of sweets, biscuits, chocolate other candies at any given shop. Despite this popularity, many people don’t know how fudge in Bucks County became a staple confection.

Similarly, fudge is surprisingly mysterious since no one can point out who invented it, or when exactly it got invented. The oft-repeated tale is that fudge came by as a mistake. Indeed, that has turned out to be a pleasant mistake!

Getting Back to the Origins

Although the origin and history of fudge before 1886 remains hazy, it’s believed to be an American invention. The first batch resulted from an accidental (fudged) overcooking of caramel. In 1886, this confection was sold for the first time at a grocery store in Baltimore for 40 cents per pound.

The recipe became popular in 1888 during the Vassar Senior Auction after a Miss Hartridge made 40 pounds of fudge for sale during the event. Soon after, fudge became a fab in colleges that tried to develop unique recipes for the confection. By the 1890s, fudge shops began to spring up in different American towns, including Atlantic City, Mackinac Island, and Niagara Falls.

Initially, the confection was mainly seen as an indulgent treat for college students. With time, tourists joined the fray since they saw it as the perfect sweet souvenir to take with them back home across the Atlantic. This is what led to the global popularity of the confection.

As the name suggests, fudge is an amalgamation of different flavors and ingredients such as caramel, nuts, fruits, chocolate, and sweets. This creates a novel flavor that you won’t find in other confectionaries. The intoxicating taste of all the flavors and ingredients in fudge makes it appealing to both the young and old. Eating fudge in Bucks County provides the happy rush of eating a sweet, filling candy and the entertainment of sampling a new confection.

Is Fudge an Ideal Gifting Item?

Everyone loves fudge, and no matter the situation, a gift of fudge will always get appreciated. This confection has the unique ability to leave people smiling. And, there’s no better way of leaving a smile on your loved ones’ faces than gifting them a beautifully packaged piece of fudge from Stutz Candy. Here are some of the occasions where fudge makes the perfect gift:

Stutz Candy has established itself as the number one manufacturer and retailer of fudge in Bucks County. Since starting out in Pennsylvania in the 1930s, the company has endeavored to adhere to its original recipes. The founders, Joe and Mary Stutz, started the company in their garage, but by 1938, they had set up a factory and the first retail store.

Although the company’s ownership changed hands a few years later, the new owners still maintained the original recipes and the old-fashioned way of making fudge. This explains why Stutz Candy has held its position as one of the leading players in the confectionery industry.

Although fudge was created by accident, Stutz Candy does all it takes to make and sell fascinating flavors that leave your taste buds wanting more. You’ll find all of the above-mentioned fudge flavors and much more sweet treats at the company’s online store and its shops in Bucks, Ocean, and Montgomery Counties. Therefore, if you’re looking for a sweet treat for any occasion, do not hesitate to sample Stutz Candy’s fudges.