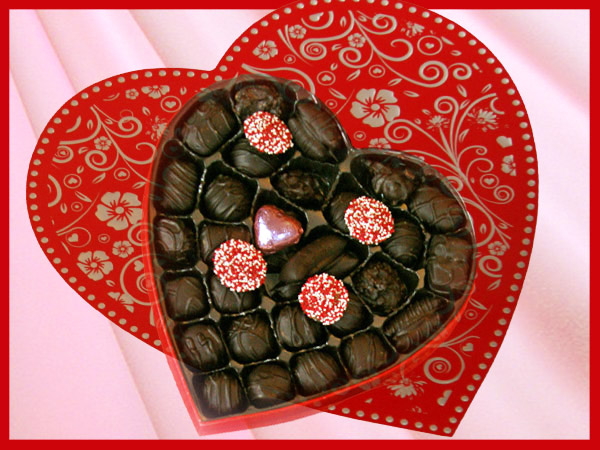 Valentine’s Day is almost here, and people are in the hunt for gifts – flowers, jewelry, chocolate in Bucks County.

While February 14 isn’t the biggest day for American chocolate consumption – that honor goes to Halloween, followed by Easter – we still eat quite a bit of it each year.

The Food of Love

People have enjoyed chocolate for centuries, although not in the form we do. The upper levels of Aztec and Mayan societies drank roasted cacao beans with cornmeal, vanilla, chilies and honey. Cacao was a commodity, with some people even using it to pay their taxes.

The European conquest of the Americans brought chocolate to places like England and France. It was a popular drink among French aristocrats – who considered it an aphrodisiac – and visitors to seventeenth century London could find chocolate houses co-existing with coffeehouses.

According to Smithsonian magazine, one such shop advertised chocolate as “a West Indian drink” that “cures and preserves the body of many diseases.”

But while people loved chocolate, chocolate wasn’t associated with Valentine’s Day. That would take the help of the biggest name in British chocolate. 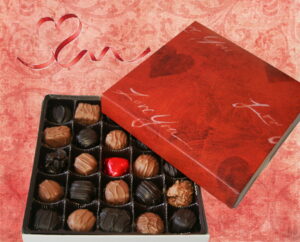 Valentine’s Day had been celebrated for centuries as a religious holiday. It’s named for two different Roman saints, both of whom have romantic legends attached to them.

But it wasn’t until the medieval era that people began celebrating Valentine’s Day as a romantic holiday, centered around a chaste, courtly love. (Picture knights admiring maidens from afar.)

The British Victorians – obsessed with the idea of chasteness — resurrected this idea, and – as History.com puts it – “showered each other with elaborate cards and gifts.”

Richard Cadbury, of the Cadbury chocolate empire, saw an opening for his business. The company had just updated its chocolate-making technique, making it much more palatable. Cadbury used the process to make what was known then as “eating chocolate” – as opposed to the drinkable version – and wanted a way to market it.

In 1861, Cadbury began selling them in lavishly-decorated boxes, including what is believed to be the first heart-shaped box. Cadbury pitched them as a dual-purpose gift: after you finished the chocolate, you could use the box to store romantic mementos.

The commercialization of Valentine’s Day made its way to America, and had become a thriving industry by the turn of the century. Leading the charge was Milton Hershey, who began making his famous “kisses” in 1907. They got their name from the kissing noise the chocolate made during production.

Chocolate in Bucks County has its own history, thanks to Stutz. Stutz has been helping to make Valentine’s Days sweeter since the 1930s, when Joe and Mary Stutz created their first recipes.

And while we value the work of pioneers like Cadbury and Hershey, there’s something to be said for the handmade, locally-crafted Bucks County chocolate Stutz provides.

Visit our website or one of our three stores to find something that can delight your loved one this Valentine’s Day.