Valentine’s Day is almost here, which means people all over the country will be busy buying 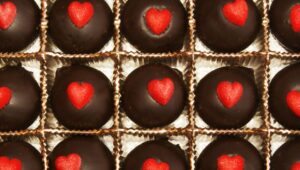 Flowers, candy and cards are pretty much the American way of doing Valentine’s Day, but that’s not the worldwide standard. Travel around the globe and you’ll find a lot of different Valentine’s Day traditions. Here are a few that we’d like to share.

France has long been considered a romantic destination – the first Valentine is believed to have been sent by Charles, Duke of Orleans.

For years, France was also home to a tradition called the loterie d’amour, or “drawing for love.” This is how it would work: men and women would gather in houses that faced each other, and then take turns calling out one another and pairing off. If the men weren’t happy with their match, they could leave her for another woman.

The rejected women would build a bonfire and burn pictures of the men who had jilted them while shouting curses and insults at them. Eventually, the French government decided the event had gotten too unruly, and banned the loterie.

By the time we’ve marked Valentine’s Day on Feb 14, people in Wales have already celebrated St. Dwynwen’s Day – their patron saint of love – on January 25.

According to legend, Valentine was either a priest who defied the Roman Empire by performing marriages at a time when they’d been outlawed or a prisoner who fell in love with his jailer’s daughter and sent her letters signed “From your Valentine.”

Dwynwen’s story is also pretty dramatic, a tale of a young woman who prays to fall out of love. An angel gives her a potion, which then turns the man she loves into ice. In exchange for reversing the effects of the potion, Dwynwen pledges to look after all true lovers but remain unmarried.

Another Welsh tradition: the love spoon, an intricately-detailed wooden spoon, carved by a young man for the woman he loves.

It’s a practice that goes back hundreds of years, with the Welsh Folk Museum in Cardiff displaying a spoon from 1667.

Women in Japan give chocolate as a gift on Valentine’s Day, but the type of chocolate they give depends on the relationship. Significant others get honmei choco, which is high-quality chocolate.

Giri-choco is for colleagues or classmates. Further down the ladder is cho-giri choco, for people who are unpopular and the woman feels sympathy for. (We’ve seen this referred to as “pity chocolate.”) There’s also tomo-choco, or chocolate women give their female friends.

One month later, men in Japan who received chocolate are expected to return the favor by giving gifts on White Day, a holiday that’s also observed in South Korea, China and Taiwan.

In Taiwan, giving a rose can be a complicated gesture. A single rose is a classic romantic gift, but 99 roses signify “forever,” while 108 roses are the same as a marriage proposal.

In English, “gaekkebrev” translates as “joke letters,” but that doesn’t really paint an accurate picture. The 300-year-old tradition is much more romantic: men wrote poems or rhymes, and then cut the paper they were written on into snowflake patterns.

The women who received these letters would have no idea who sent them. The only clue would be a series of dots, one for each letter of the man’s name. If the lady guessed the sender, she would receive an egg at Easter. If she guessed wrong, she would have to give the sender an egg.

When you’re single, Feb. 14 can be a rough day. We can take inspiration from Finland, which marks Ystavanpaiva, or “Friend’s Day. It’s a day meant to remember friends, rather than significant others. Estonia has a similar Valentine’s tradition, called sobrapaev.

As you can see, there are a lot of amazing ways to celebrate Valentine’s Day. But if you’re looking for a gift that’s both simple and classic, you can’t go wrong with chocolate. If you’re looking for a gift for this year, look no further than the Stutz Candy Company. For five generations, we’ve been helping make Valentine’s Day a little bit sweeter.

One thought on “Valentine’s Day Traditions Around the World”